Click here to check out our recent write up in the Hartford Courant! 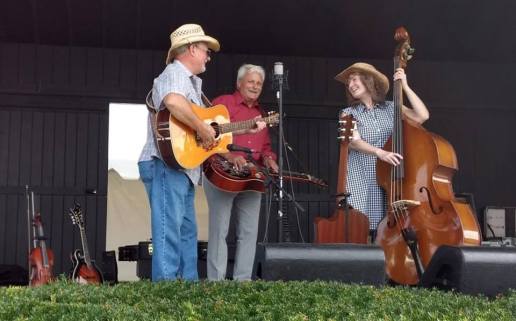 The Still Pickin’ Band will be making their first public appearance in the Middletown area at the Elks Club located at 44 Maynard Street on Oct 13. The trio who specializes in bluegrass music and classic country is currently touring a variety of Elks facilities to bring their early American genre to a public audience.

They are carrying out their chosen task to help proliferate bluegrass music
in Connecticut. The genre has a fan-base made up of about 80% seniors; those who grew up listening to this acoustic music. Sadly, the genre is no longer played on country music radio. Still Pickin’ has made it their goal to bring bluegrass back to the people who love it and to also introduce it to younger people who have not yet experienced it

An interesting aspect of the trio is that tenured member, Jim Sharpley, learned to play the banjo only after he retired at 65. A quick study, he soon followed that up by learning the Dobro guitar. A self-taught musician and former broadcaster with WNHC-TV, Sharpley heads up the trio as it nears its second decade. Sharpley is also a key figure with the Podunk Bluegrass Festival held in CT annually each August. Other musicians in the trio are Dennis Sheridan of Bolton and Patricia McDonald of Mansfield.

The Elks concert starts at 7PM and doors open at 6:30 pm. You’ll hear about thirty songs, including cuts from their recent CD, Reuben’s Train.

The event takes place in the Patio Room with limited seating. Smoking will be suspended during this concert. Tickets are $10 at the door or can be reserved at stillpickinband@gmail.com or 860-933-3147. This fund raiser will help support the homestead of the late Bill Monroe, the father of bluegrass.